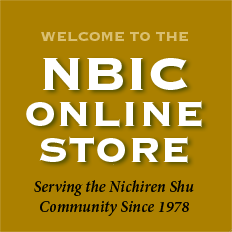 With Nichiren Shonin's teaching spreading among the people, the teaching clashed with former religious concepts, traditions of family and feudalism among Nichiren's followers, disciples as well as lay believers. In the sixth month of the third year in the Kenji period (1277), two incidents happened simultaneously concerning family-feudal relationships and religions. One was religious strife between Nichiren's disciple, Inaba-bo Nichiei, and Nichiei's father, Mitsumoto, a believer of the nembutsu. The other incident was also a conflict of faith between Shijo Yorimoto, a lay follower of Nichiren Shonin, and Lord Ema, who was Yorimoto's lord. In both cases Nichiren Shonin guided his followers in trying to solve the problems. The two letters of Nichiren Shonin included in this book demonstrate this: the "Shimoyama Letter" was written in behalf of Nichiei, defending him; and "Yoimoto's Letter of Explanation" in behalf of Shijo Yorimoto was in Exoneration of Yorimoto.